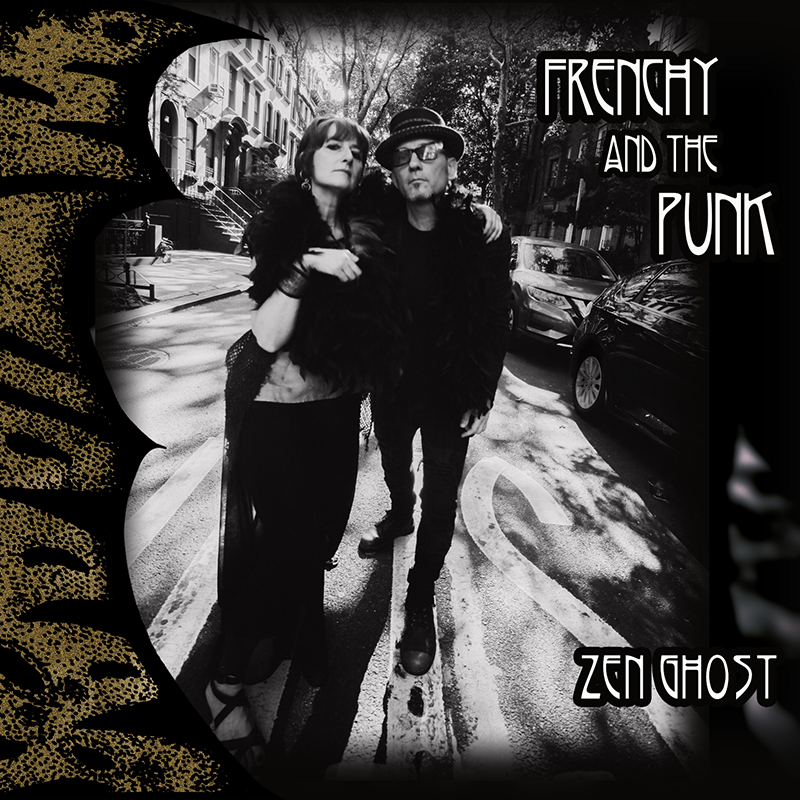 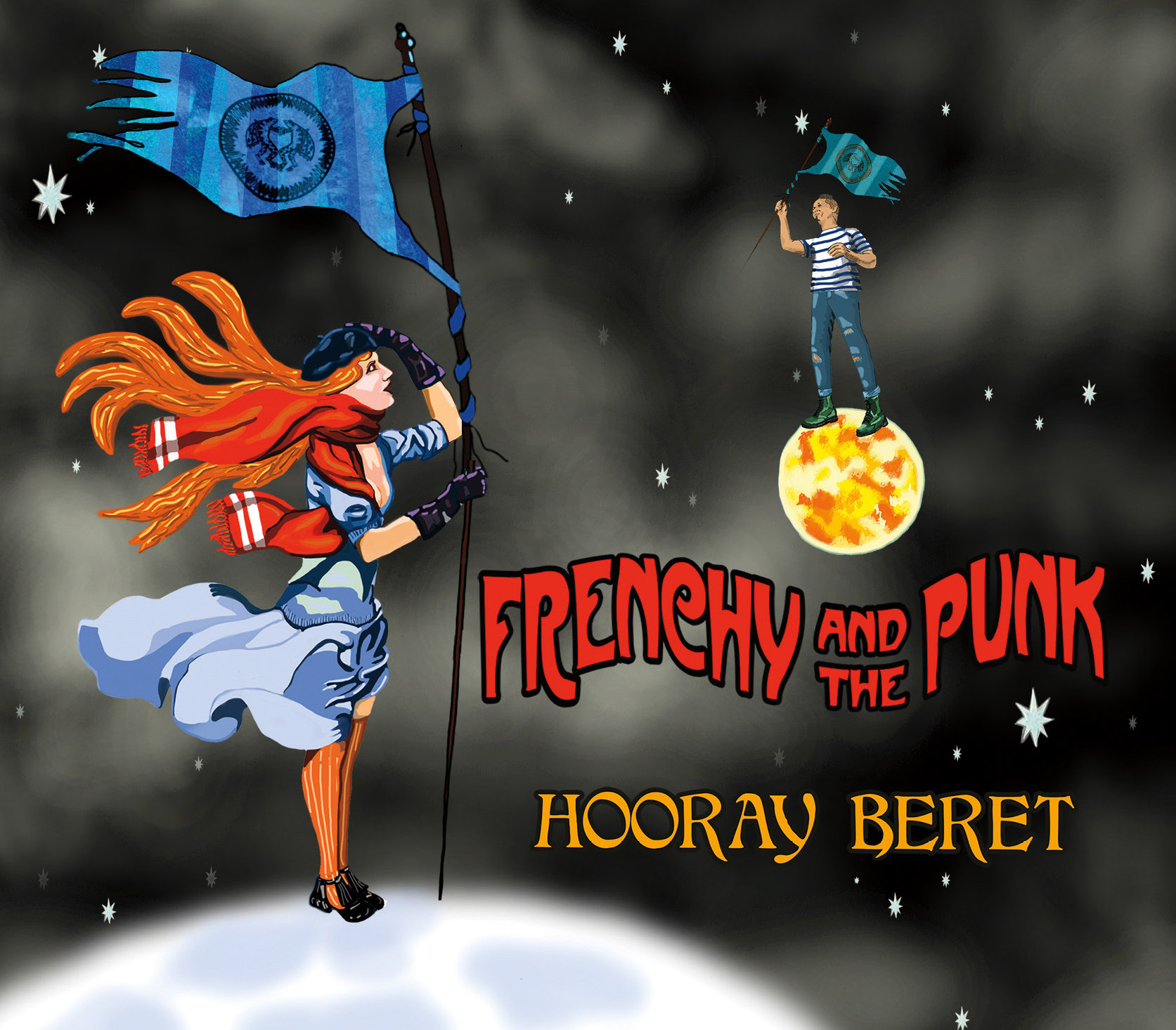 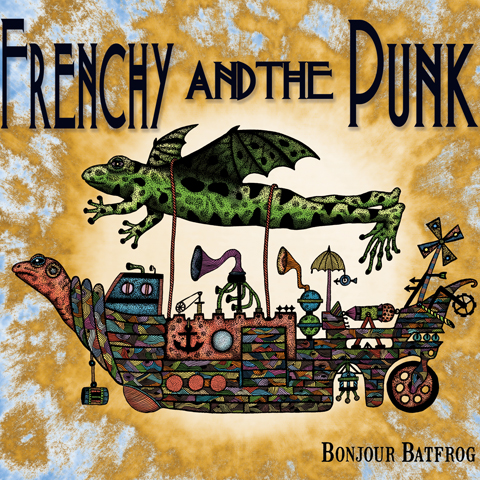 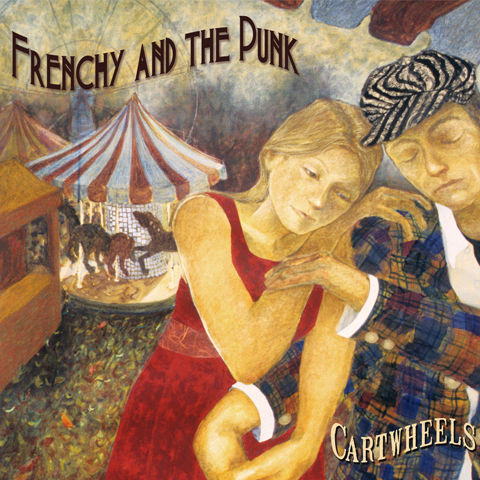 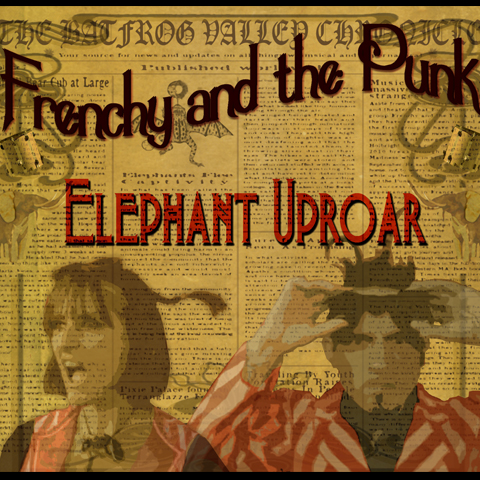 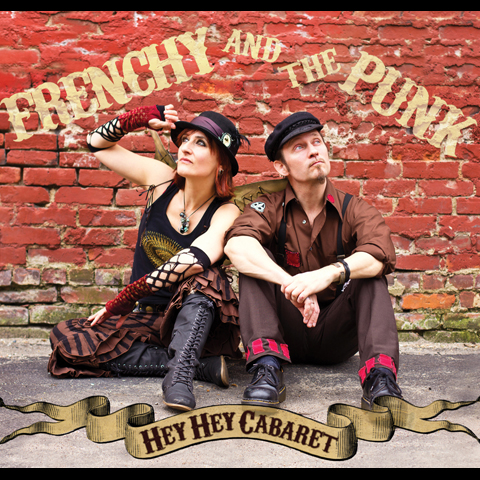 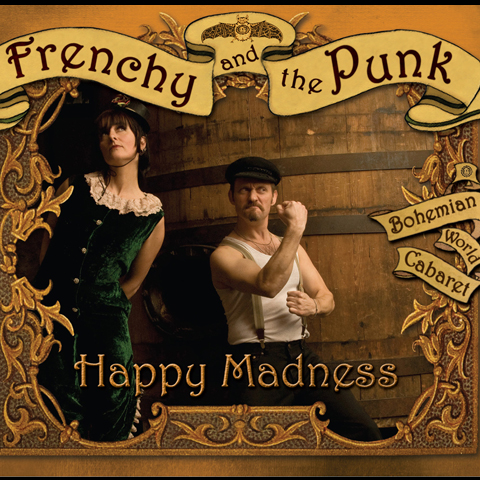 Dark times make for dark songs. And Zen Ghost, the seventh album by New York folk/postpunk/cabaret duo Frenchy and the Punk — singer, percussionist, and lyricist Samantha Stephenson and guitarist and composer Scott Helland — written and recorded during the pandemic-induced downtime of 2020-2021, finds the already shadowy sound of the hard-touring twosome taking an even darker turn. An inward spin, into the pair’s previously unexplored personal planes and interpretations of the insanity of our increasingly tumultuous age. But despite its more pronounced moodiness, Zen Ghost, like the rest of the band’s oeuvre, offers plenty of opportunities to dance in the darkness.

"Frenchy and the Punk find a happy medium between the sonic atmosphere and thoughtful melancholy of post-punk music and the unmistakable drama of cabaret. No doubt there are enough songs about depression in the world, so it is refreshing to find a band who is as beautifully manic as some of the finest artists on America’s ‘early punk’ scene." (Amplify Music Magazine)

"a mix of Polly Styrene, Excene Cervenka, maybe some Pretenders and GoGo's thrown in. This just has such a cool feel to it. It's like Karen O but completely mellowed out and with a great 80's pop vibe. Kind of loving this!"(Blood Makes Noise Music Blog)

The album-opening “Wah” winks in awareness of this paradox. Over an insistent club beat and a stylish, Euro vocal hook, Stephenson instructs herself to “stay at home on a Saturday night...diving into what feels real.”

A feminist theme of self-exploration-as-activism recurs in almost every song. The deliriously cool chorus of the New Wave and spy-toned “Lankey Bell Bottoms” celebrates continual growth and the rejection of triviality, while the gorgeous jangle-pop of “Sing” offers a compact time-lapse portrait of a woman ignoring or forestalling her true calling in five different decades of her life.

Steampunk seems to be more about image than art. But in spite of their deep roots in this most intriguing niche of American pop culture, New Paltz's Frenchy and the Punk understand the art of songwriting in such a masterful way that the visual aspect of their thing is almost secondary to the penchant of singer/percussionist Samantha Stephenson and multi-instrumentalist Scott Helland for writing great pop songs. And on this fifth full-length of theirs, Bonjour Batfrog, the duo deliver their strongest set yet.

These 11 largely acoustic songs strip down the kind of vamp you loved on albums like Murder Ballads by Nick Cave and the Bad Seeds or PJ Harvey's To Bring You My Love into a gypsy-kissed jar of that absinthe-and-moonshine concoction you always knew existed. The imagery of their lyrics, meanwhile, will no doubt sate the thirst for the unusual that long-time Frenchy and the Punk fans have come to expect, especially on tracks like "Bringin' Out the Dead (Edward Gorey Séance)" and "Batgirl," which conjures the notion of Morticia Adams, Lily Munster, and Vampira as the greatest three-woman act network television never had. This Batfrog has some serious wings to fly beyond the parameters of steampunk and into the stereo systems of anyone who loves quality folk punk. Frenchyandthepunk.com.

The ever-industrious independent duo of Samantha Stephenosn and Scott Helland tour about as frequently as Bob Dylan. In the Process, old songs tighten and new songs become fan favorites before studio versions can be made. Having produced their past few albums with Gary Levitt at his Young Love Studios in Brooklyn, Frenchy and The Punk found an engineer who brings out their best. It's forced them to rethink older songs and encouraged frander ideas for their new tunes.

The spare "Halloween for Christmas" demands that the October holiday be given lead status over the overhyped Christmas season. The acoustic, Celtic-tinged and sweetly subdues "Mulina Mulina" explores the connection between the elements and emotions that govern the earth in line with faerie folklore. A gues accordionist augments the festive atmosphere of the French-sung live staple "Le Train," where the Eastern European cabaret arrangements reflects the persistent longing of dreamers. "Caravan" is among their best-known, long serving live numbers. Cartwheels is a necessary addition to their catalog.

This insatiable, eclectic duo has been ever evolving through their many projects, evident once again on their sixth full-length album. Once a mogul in the hardcore metal/punk scene, neoclassical guitarist Scott Helland teamed up in the late '90s with Samantha Stephenson—the smoky French-born singer, dancer, and percussionist—to form the popular cabaret stylings of the Gypsy Nomads. In more recent years, they morphed into Frenchy and the Punk, and have taken their fresh, fantastical sound to more than 700 shows in America and Europe. Their musical leanings appeal to fans of theater

and world music, and such varied artists as Dresden Dolls, Faun, Django Reinhardt, and Edith Piaf.

Elephant Uproar is a creative sidestep away from their last release, Hey Hey, Cabaret. Stephenson's lusty French vocals on "Nevermore the Matador" lure the listener in from minute one, as Helland's gypsy guitar plucking finalizes this mesmerizing opener. The instrumental "Isis Rising" follows, featuring Helland's frantic gypsyesque Spanish guitar and Stephenson's tight percussion. The strictly percussive "Carnival" sends the heart racing into "Rock Paper Scissors," which is also an exhilarating, eccentric drumming duo video (YouTube it, you'll love it). The title track, along with "Orient Express," may be one reason these two are popular at steampunk conventions—their tribal, metallic sounds grab you by the neck. It is no wonder that Yahoo! Music has dubbed them one of the top 25 duos in America. Their next local gig is at BSP Lounge in Kingston on May 8. Be there and be impressed.

The follow-up to the breakthrough Happy Madness, Hey Hey Cabaret continues the dynamic steampunk duo's shift into a touring troupe that uses the recording studio to bring out its best. Guitarist Scott Helland (who was a member of the legendary `80s punk group Deep Wound with Dinosaur Jr.'s J Mascis and Lou Barlow and Outpatients) particularly beefs up his sound. His acoustic power chords provide a punkish energy to tracks like "Silent Movie," "Steampunk Pixie," and "I'm Free."

Vocalist Samantha Stephenson sings in a variety of voices that tease, sympathize, and mock the unusual circumstances the songs dictate. She writes with an eye and ear for humor, ensuing the songs' narratives never tire. "Confession of Jack Bonnie and Sally Clyde" dances on the head of a pin and "Birthday Fanfare,"  "Hey Hey Cabaret,"  and "Lunar Frenzy" kicks up the duo's manic side.

When wizened punks and august hippies gather around campfires to reminisce in the Joe Strummer documentary The Future Is Unwritten, the orange halflight illuminates the striking similarities in their views, their histories, and even their physicality. In that same natural glow we find New Paltz gypsy-cabaret-folk-punk duo [Frenchy and the Punk], whose new release, Happy Madness, percolates with stripped-down DIY energy, tribal rhythms, and earthy drama. Samantha

Stephenson and Scott Helland are accomplished performing vets; she of the visual arts and dance, he of metal and punk bands.

In languages that veer from French to Czech to English, Happy Madness offers waltz-time chansons of yearning, intrigue and loss ("Magician and the Dancer," "Marionette"), hypnotically pummeling manifestos of life in the fecund substrata of neo-paganism ("It's OK," "Dark Carnivale"), and modal instrumentals that somehow evoke CBGB, Ennio Morricone, and the Port of Marseille ("Happy Madness," "Sombrero Cabaret"). This and more is delivered mostly with acoustic guitar, mallet-pounded drums, hand-held percussion, and cinematic, funny, deftly political, and erotic lyrics. Stephenson's autobiographical "Yes! I'm French" offers the witty line "When those jokers served up freedom fries / I saw Lady Liberty rolling her eyes," while the sexy romp "Make Out" is a brazen celebration of parking lot intimacy in which one can almost smell motor oil and Aqua Net. [Frenchy and the Punk] melding of ancient archetypes with scrappy street-level attitude makes Happy Madness a lively must-have for punks, hippies, and everyone inbetween.