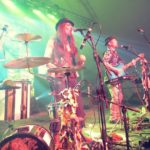 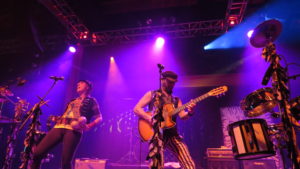 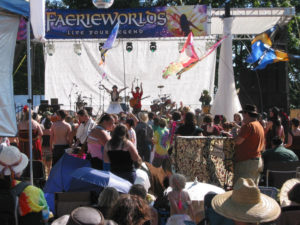 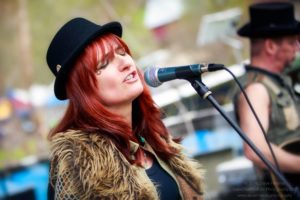 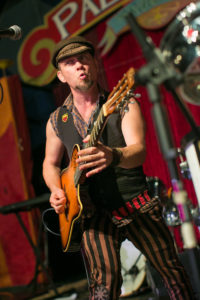 Born in France/Sings in both French and English 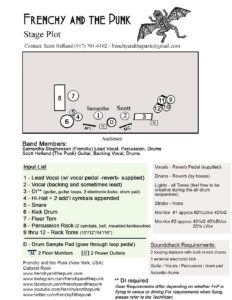 "An extremely unorthodox duo, this French-born singer and
punk rock guitarist perform more of a carnival than a concert"
Musikfest 2014
(largest free-to-the-public festival in the U.S.)

Genre: Acoustic Alternative with elements of Cabaret, Folk and Rock

Typical Venues: Music Festivals, Art and Culture Events, Clubs, Cafes (US and Europe) Equally at home on a festival stage as in a small intimate stage setting.

The Storm is a call for Rebuilding (from Live Stream concert August 13, 2020)

These Are The Days – Live in Lincoln UK

The album-opening “Wah” winks in awareness of this paradox. Over an insistent club beat and a stylish, Euro vocal hook, Stephenson instructs herself to “stay at home on a Saturday night...diving into what feels real.” A feminist theme of self-exploration-as-activism recurs in almost every song. The deliriously cool chorus of the New Wave and spy-toned “Lankey Bell Bottoms” celebrates continual growth and the rejection of triviality, while the gorgeous jangle-pop of “Sing” offers a compact time-lapse portrait of a woman ignoring or forestalling her true calling in five different decades of her life.

"A Little Punk, A Lot of Spunk... [Frenchy and the Punk] are creating their own niche in the music world with a sound that seduces audiences like a sultry cabaret show" Eugene Oregon Weekly

"I was so shocked by Frenchy and the Punk, they were stunning performers and to top it off the music was brilliant as well" Live Music Weekly, UK

"it's like falling through a cloud of opium and landing in a vaudeville show..." Missoula Montana Independent

"this album (Happy Madness) has beer and absinthe splashed all over the place." Buzzine.com

"It's like the secret history of fairy tales as told in your favorite corner bar at a surreal after hours party" Jordan Block - SepiaChord.com

"It's like a Steampunk fairy tale with a serious case of wanderlust." Jenn O'Donnell - Adequacy.net